It’s time to get this blog up and running again!
August just flew by, and then we had company over Labor Day weekend.  My sister, Patti, her daughter Mallory, and Mallory’s boyfriend, Owen, flew into Chattanooga from Hartford, CT, on Saturday and left on Monday.  We had a great visit, but they had a hellatious time getting home, due to tropical storm Lee, which shut down all air travel on the east coast.  They were supposed to arrive home just after midnight on the Tuesday after Labor Day, but ended up driving all night from Chattanooga to Charlotte (via Atlanta!) to catch a connecting flight. They finally made it home at 4:30
in the afternoon!

Dad sold his house in Charlotte; it closes on October 12th, and he couldn’t be happier
(nor could I!)  The timing is great, because he is no longer on his multiple myeloma meds.  His blood work was so satisfactory that he was able to stop taking them.  When he goes back next month to pack up the remaining stuff in the house, he will visit his doctor.  If the new blood tests come back with healthy readings, he will only have to schedule return visits every 6 months.  It’s all good!

I realized just recently that we have navigated a major milestone.  Subtle changes in our lifestyle indicate that we are no longer inhabiting this house; we are residents of not only the property, but the town of Ellijay.  Here’s how I know:

– When we first moved in, we ate our meals at a fold-up table, and sat on patio
chairs.  Then the dining room furniture moved in.  Ah, civilization!  But just recently, we acquired some bar stools to utilize at the kitchen counter. To me, now that we have a choice of dining venue, I realize how much progress we have made since May.

– We have shifted our focus from the inside of the house, which is largely habitable
now (a huge milestone!), to the exterior.  Eyesores, like the sagging paneled ceilings on the front and back porches, have been removed.  Missing trim around the front door (what’s not to love about exposed pink styrofoam sheeting??) has been replaced.  The new paint scheme is evolving across the front of the house, and the once too-intricate porch railings have been simplified into elegant “Xs”.  The porch trim has gone from raw wood to a spiffy paint treatment that enhances the overall architecture. Now when we come up the driveway, we no longer see a “saggy, baggy elephant”, and that was the whole point, wasn’t it? 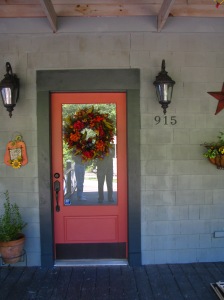 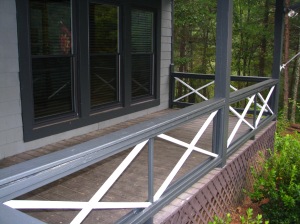 – We are shoring up the house for a cold winter.  When we first bought the mountain home, it was with the assumption that when the snows came, we would high-tail it down to Atlanta.  Nope.  A whole house generator is now in place, and new, energy-efficient windows were installed yesterday.  Looks like we are going to tough it out.  (The only thing we haven’t figured out is how to get up and down the driveway.  That is a major hurdle (no pun intended) for which we, as yet, have no solution, other than making sure the freezer is stocked, and so is the wine cabinet…)

– We are now making plans to amend the house with things that are non- essential
(i.e., plumbing, gutters, etc.)  Dad wants to turn the garage back into a garage (the previous owners had removed the garage doors and installed french doors, in an attempt to turn the space into a video room.  HUH?)  And I want/need a fireplace.  So we will be getting quotes for those projects.  We are also going to tackle
the downstairs living area, which is now just a hangout for the laundry, water heater, well filters, and cave-crickets (which have to be some of the creepiest
bugs EVER!)  The “red-neck bar” (aptly named by daughter Jen) is also being transformed, but that is red meat for another blog entry!

– We went out to Sunday brunch for the first time last weekend, joining the locals
at the Blue Door Café.  At exactly 10:00 am, the eggs benedicts start cooking, and the place fills up!  I had the best breakfast ever, and enjoyed it all the more knowing that someone else was going to have to clean the grease spatter off the stove!

Speaking of stoves, another milestone was achieved last week.  I was taking a loaf of banana bread out of the oven, when the oven door partially fell off!  The handle came off in my hands, along with the outer aluminum shell of the door (thank you God, thank you!)  I had to open the oven with the 2 screws that once held the handle on, and had almost extracted the bread when the door tried to snapped shut.  As I grabbed to keep the door open, the banana loaf went airborn, and landed upside down on the interior glass of the door, splattering hot chunks of bread all over my
feet!  Greg was on a conference call upstairs, as I started shrieking what I can only imagine were uncivilized and not very ladylike words.  (He didn’t even
put the call on hold to see what had transpired in the kitchen, saying later
that he was used to my habit of yelling at inanimate objects, and dogs.  He thought it was just normal household noise, as did the people he was conferencing with! (Now I ask you, “how sad is that?”  I am turning into the old lady of my nightmares!  :>)

Long story short, I hopped on the internet and started shopping for new ranges, and found the one I wanted at Lowe’s.  Within the hour, I was in the appliance section, and claimed the only one they had in stock as mine.  Out with the old and
in with the new the next day.  (Instant gratification is a wonderful thing.) By the way, a huge spatula salvaged what was left of the banana bread (which Dad dubbed “foot pie”), and we happily consumed it for several breakfasts.

I am passionate about writing, as well as design/DIY/decorating. I decided to combine these skills in a blog, that describes the joys and challenges of transforming a shaggy, baggy elephant of a mountian house into a stunning home.
View all posts by vkroo →
This entry was posted in Uncategorized. Bookmark the permalink.