The kitchen is the “heart” of a house.  In the mountain home, I finally have
countertops to put things on, and cabinets to hold things, so it seemed logical
to make it look good ASAP.  Even before attacking Dad’s bedroom, I started slapping paint on the kitchen walls.  The result, as you can see, was disastrous! 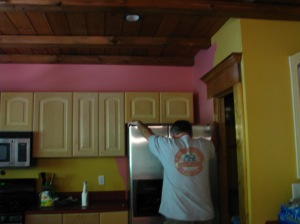 What was I thinking?  A mountain home, living with 2 men, and 2 macho pups, and I am painting the walls pink???  Actually, the color was supposed to be a
coral color (the color of a sunset, was my desire!), and the thought was that
it would brighten up a very dark space.  However, once applied, it was definitely bubble-gum pink.  Even I was holding my nose, long before the wall behind the refrigerator was covered.

Sometimes, one should follow one’s own advice:  buy paint samples and apply them liberally before you invest in gallons of a color.  Did I do that?  NO!  But…to make matters even more complicated, there’s the matter of the wood ceilings, which are shellacked, thus giving them a definite orange hue.  It finally dawned on me that the ceilings affect any color that is applied to the walls.  Depending on time of day and the quality of light that is in the room, they do turn them day-glo!

My next attempt at painting the kitchen was to use an apple green paint called “Thin Asparagus”.  We all chose that color (so that blame could be equally dispersed!), and when applied to the walls, it became a fluorescent turquoise!

In the end, Greg came to the rescue.  He had suggested from the get-go that we use
the same color on all the walls (since the downstairs living areas and even the
upstairs hallway are a continuous space) that we had used in the living and dining rooms in Atlanta.  I really didn’t want 2 houses with identical colors, but in the end, Glidden’s “Woodbine” was painted throughout.  It really is beautiful, and the wood ceilings make the color look very different than it appears in Atlanta.

The kitchen cabinet door and drawers, as mentioned in an earlier blog, were shiny and white.  Imagine my surprise when, upon inspection, I was able to peel a plastic shell off of one of the doors!  Kind of like a snake shedding its skin!  Before you knew it, Dad and I were ripping all the plastic shells off (see pic of Dad, below, holding one of the “shells”). 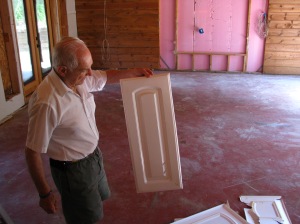 Everyone agreed that the resulting unpainted MDF finish underneath the plastic  is a huge improvement.  We’ll live with it until we have time to refinish the cabinets…

About the appliances.  The dishwasher is old, but its exterior is stainless, and it works like
a champ.  So far, so good.  There was no refrigerator, so we bought one, sight unseen, on Lowe’s internet site.  I like it as well as any refrigerator that I actually picked out in a showroom, which is not saying much.  [As an aside:  IMHO, fridges always look
terrifically well-designed when empty… Then you start trying to fit your stuff
in, or something accidentally spills from the top shelf, and oozes on down to
the bottom, thus forming a gelatinous mass that only fingernails can remove…GRRRR!]

The propane stove is a piece of work.  It is fairly old, but not unsightly, and it,
too, is operational.  Stainless and black finishes make it compatible with the other appliances.  The real problem was the grease factor.  You couldn’t touch it without going “EEEW”!!  It seems to me that someone was very upset about the house foreclosure, so in a fit of rage, they liberally applied about a pound of bacon to each side of the stove (see pic below), and then slide it back into place. 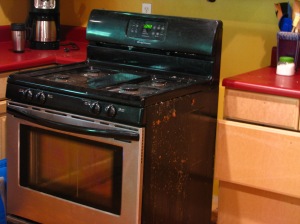 Dad and I had to use a paint scraper to remove it!  (Now, please understand that I, too, would be angry if we lost our home to foreclosure.  But since bacon is worshipped in this household, I would fight back by sacrificing lima beans, and applying them liberally, everywhere…)  It took us the better part of a day, scrubbing with Mean Green degreaser, before we could touch the stove without having to pry our fingers off…

The microwave was another story.  The handle was missing, so it was
inoperable.  It was also unbelievably greasy.  If you accidentally touched it
(no matter how hard you tried not to), the reaction was inevitably “EEEW”!!  Dad is the one that couldn’t stand looking at it any more.  I claimed
that a microwave was one appliance I could live without, but he insisted that
we buy a new one, and we are all so relieved he did!

Now for my rant…Can anyone tell me why people insist on having
stainless steel appliances???  I think that realtors have convinced all buyers that it’s a must.  Realtors must assume that new homes with stainless steel appliances come
equipped with man-servants that constantly wipe them down with a cleaner (that
I have yet to discover) that eradicates streaks and fingerprints.  What a pain!
I have white appliances in Atlanta (I know, how gauche!) and I love them.  We would not have willingly bought a stainless refrigerator or microwave in the mountain house, but were forced to match existing appliances that we could not afford to replace.  The final insult is that there is an up-charge for that finish you can never clean. How special is that???

At this point, the kitchen is now usable and no longer  unsightly.  It needs a pantry door (we robbed the existing door and used it elsewhere, when the refrigerator invaded its space), and the cabinets still need to be finished.  But we have added some over-sink lighting, and some very cool pendant lights over the bar that sport
red glass shades.  Bar stools are the next “splurge items” on my list.  I love
to sit at a kitchen counter and drink coffee in the morning! 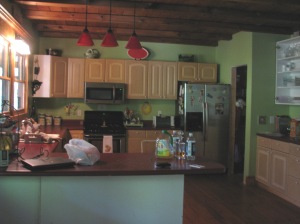 Until the next blog installment…

I am passionate about writing, as well as design/DIY/decorating. I decided to combine these skills in a blog, that describes the joys and challenges of transforming a shaggy, baggy elephant of a mountian house into a stunning home.
View all posts by vkroo →
This entry was posted in Uncategorized. Bookmark the permalink.