Enough With the Water, Already!!!

For those of you faithful readers of this blog from its infancy, you will remember all of the plumbing problems we had when we moved into the mountain house. They were so bad that I dubbed this place the ”Leaky Tiki”, and half-heartedly joked about the checkbook that was reserved purely for plumbing emergencies.

With the new roof, the waterfalls in the living roof stopped. When the monstrosity of a jetted tub in the upper full bath was removed, and replaced with a stand-alone shower, the “rain” stopped falling in Dad’s bathroom. Things were looking up, and I suppose we were lulled into a false sense of security.

Last January, we left for a week’s family vacation to our Hilton Head timeshare. It just so happened that was the same week that a bitterly cold blast hit the southeast.  Hilton Head was iced in, and we reportedly got a fair amount of snow at home. Well, since we weren’t home to monitor the situation, and let the faucets drip, you can guess what happened.

Yep, upon arriving home, and before you could say “Jack Frost”, I was standing in 4” of water in the hallway outside of our bedroom, which is located in the basement apartment.  Greg grabbed a mop, & Dad commandeered the wet vac, and eventually the flood receded.  However, the damage was considerable.  All of the baseboards & door moldings, which Greg had just installed, were destroyed, as well as all of the newly laid laminate flooring in the remainder of the downstairs living area.

The insurance company paid us handsomely for the damage, and recommended some construction people who could make repairs. Unfortunately, about 90% of the residences in the area suffered a similar fate, so help was never forthcoming.  Greg (bless his heart!) ended up doing the flooring installation.  Since he works for a living, his free time to complete that enormous project was limited to weekends. Thus, it was several months until we had real floors (i.e., not concrete) to walk on.  The trim was never replaced. Ugly!!!

Then, last weekend, we had “the attack of the giant hair ball”.  It turns out, per Harold, our resident plumber, that every piece of hair and gunk that was trapped in the pipes since the house was built in 1997, finally conspired to back up the plumbing in the entire house. The end result, because we are bottom dwellers, and everything runs downhill, was a waterfall from our bathroom ceiling. The fix was to open a giant hole in the lovely wood ceiling, in order to drain the lines.  (That industrial look is starting to grow on me, in some perverse way.)

Now, I guess you are thinking that all of this water damage has me really upset, but in a word, no!  Now that the ceiling is torn up in the bathroom, a major gut is in order. Seems like this is the perfect time to rip out the ugly fiberglass shower/tub thing, with the broken vintage faucet knobs,

and replace it with a stand-up shower.  While we are at it, the tile floor we put down, that chipped and cracked (partially from water damage, but mostly because a good deal on tile isn’t always a good deal!) will be changed to ceramic wood plank-looking flooring. It’s time to change the color scheme, and rid that room of anything that reminds me of postdiluvian memories.

Speaking of color, I have already begun changing the color scheme in the living area.  Ironically, the first color we painted was called “Drizzle”.  I wasn’t really in love with it, but just the name of the paint said “outta here”.  Have started re-painting with a color called (SW) Elizabeth Street Blue”.  It’s part of their Charelston historical collection, and I love it!  Last weekend, Greg finished building the wall unit in that area,

and built a platform for the gas fireplace.

Next step is to construct the fireplace surround & add a mantel, and for me to paint the cabinets…(sigh…when???)

And for my final major project of 2015, I am going to tackle the master bedroom.  It is now a dog playpen, with the bed covered with half-chewed shoes and bones, and dog fur.  However, I am determined to have a beautiful, adult bedroom this year, that the dogs will enter by invitation only.  I purchased some snazzy vinyl wall stickers; the wall color will change dramatically; and I hope to convince Greg to construct a built-in bed with a storage surround. I love this look & the functionality, found on The Lily Pad Cottage blog: 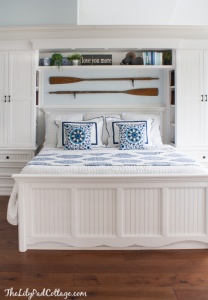 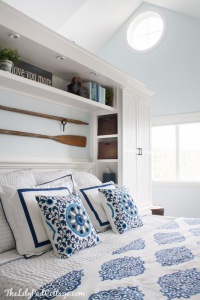 I also purchased some new sheets (cannot remember the last time that happened), because they are all on sale now, and have a design wall of fabric swatches at Fabric.com (my go-to place for fabulous fabric, because of their selection, easy-to-use website, and great prices!) to choose from for sewing bed pillows, window treatments (for bath & bedroom), and a bed throw.

I will be chronicling all of these changes in the blog, and I’d be honored if you would join me, to view the progress, and provide occasional moral support!

My plate is full.  Oh, and LeeAnn called last night to say that her grandkids, Faith & Justin, will probably be arriving home on January 30, instead of February 10!  That is wonderful news, but it means I won’t be able to complete their rooms before they arrive. Now, the goal is to have all of the furniture done by then, and then everything else, as they say, is gravy!   I still have to finish Faith’s furniture (bed, nightstand, & vanity!), as well as Justin’s dresser and nightstand. Gotta get painting…

I am passionate about writing, as well as design/DIY/decorating. I decided to combine these skills in a blog, that describes the joys and challenges of transforming a shaggy, baggy elephant of a mountian house into a stunning home.
View all posts by vkroo →
This entry was posted in decorating, Uncategorized and tagged dealing with water, floods insider, freezing temps, making repairs. Bookmark the permalink.

Living to inspire and be inspired